JICJ 2020 Special Issue: Justice and Accountability for Sexual Violence in Conflict: Progress and Challenges in National Efforts to Address Impunity 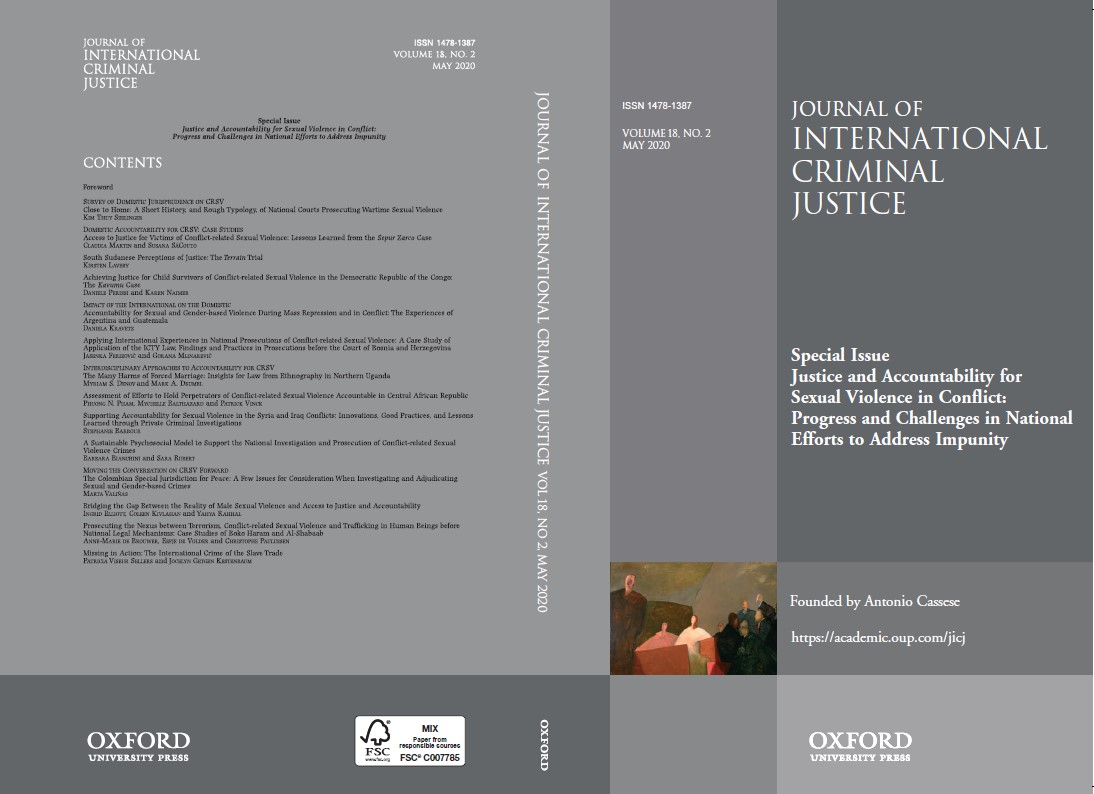 The Antonio Cassese Initiative is excited to present the launch of a Special Issue of the Journal of International Criminal Justice on Justice and Accountability for Sexual Violence in Conflict: Progress and Challenges in National Efforts to Address Impunity.

In Resolution 1888 (2009), the United Nations Security Council urged Member States to investigate and prosecute conflict-related sexual violence and established the UN Team of Experts on Rule of Law and Sexual Violence in Conflict (Team of Experts) to assist national authorities in this regard.

To commemorate the tenth-year anniversary of its establishment, the Team of Experts partnered with the Journal of International Criminal Justice for this special publication.

This 336-page long Special Issue (published as vol. 18, no. 2 2020, of the Journal of International Criminal Justice brings together the experiences of practitioners and academics of diverse backgrounds actively engaged in advancing accountability and justice for victims and survivors of conflict-related sexual violence through national justice institutions.

The articles in this Special Issue deal with examples of domestic jurisprudence as well as case studies of domestic accountability for conflict-related sexual violence (CRSV) and addresses the impact of international actors on practices of domestic institutions.  With the aim of broadening the discussion among various different participants in the processes of justice on both the international and national levels, the Special Issue further discusses interdisciplinary approaches to CRSV, and breaks new intellectual ground about this type of violence and the ways to effectively address it in the years to come.

The Journal of International Criminal Justice

In 2003, Antonio Cassese established the Journal of International Criminal Justice (JICJ) together with a group of distinguished colleagues, to address the major problems of justice from the angle of law, jurisprudence, criminology, penal philosophy, and the history of international judicial institutions.

The JICJ is today the most prominent journal dealing exclusively with issues related to international criminal justice, promoting diverse reflections on accountability for serious violations of international humanitarian law and human rights, including philosophical and historical considerations as well as informed criticisms on current and future trends.

The UN Security Council first recognized conflict-related sexual violence as a threat to peace and security in Resolution 1325 (2000), and in the same resolution urged states to promote accountability and justice for victims and survivors and hold perpetrators responsible. In Resolution 1888 (2009), the Security Council again urged states to fulfil their responsibility to end impunity, noting that only limited numbers of perpetrators of sexual violence have been brought to justice. Recognizing that justice systems in conflict and post-conflict situations may have been significantly weakened, the Security Council also established the Team of Experts to ‘deploy in situations of particular concern … to inter alia, work closely with national legal and judicial officials and other personnel in the relevant governments’ civilian and military justice systems to address impunity, including by the strengthening of national capacity, and drawing attention to the full range of justice mechanisms to be considered’. The Team of Experts is based at United Nations Headquarters in New York. Led by a Team Leader who reports to the Special Representative of the Secretary-General on Sexual Violence in Conflict, the Team comprises experts from the Department of Peacekeeping Operations (DPKO), the Office of the United Nations High Commissioner for Human Rights (OHCHR) and the United Nations Development Programme (UNDP). This unique ‘co-lead’ structure facilitates a ‘One UN’ approach to the fight against impunity for conflict related sexual violence.

Previous Training on prosecution and adjudication of international and transnational crimes in Tanzania
Next Blog Post for OpinioJuris by Letta Tayler: Cryer’s Ninos

A day of celebration with Baltasar Garzón and Antonio Cassese